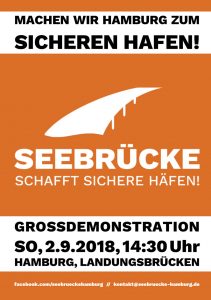 Mediterranean Sea – the deadliest border in the world

Every day people risk their lives when they set sail on boats towards Europe, fleeing war, poverty, oppression and torture. More than a thousand of them drowned at sea in the last few weeks because Italy and Malta shut their ports to private sea rescue ships.

This concept of deterrence and isolation is cynical, inhumane and, besides, irrational: attempts to escape unbearable conditions experienced by refugees cannot be stopped. Moreover, a coldly calculated let-them-die policy of the European governments in the Central Mediterranean is a clear violation of the international Law of the Sea.

Sea rescue is not a crime but an obvious humanitarian duty. The closure of harbors and the failure to render aid to those in distress at sea amounts to a further deprivation of migrants´rights and only increases mortality rates. An increasingly hostile language used in politics and media additionally fuels racism in our society.

It is time to rise up and say NO to the denial of humanitarian assistance and YES to the duty to rescue and safe passages! Nobody can say they didn’t know. People are left to perish at sea by our governments, in our name. Become part of SEA BRIDGE and take a collective stand for:

Hamburg as a SAFE HARBOUR

When the European governments fail, it is up to European cities to act! Barcelona, Palermo and Berlin already set a good example. We, the people of Hamburg, decide to follow suit and from now on welcome those in need to our city! We demand the Senate of Hamburg – “Germany´s gate to the world” – to open these gates to those seeking shelter and:

It is time for political parties and governments to accept that our NO to soaring death tolls in the Mediterranean Sea will have the final say, not their backstage deal-making.

That is why we call for the next SEA BRIDGE DEMONSTRATION in Hamburg: